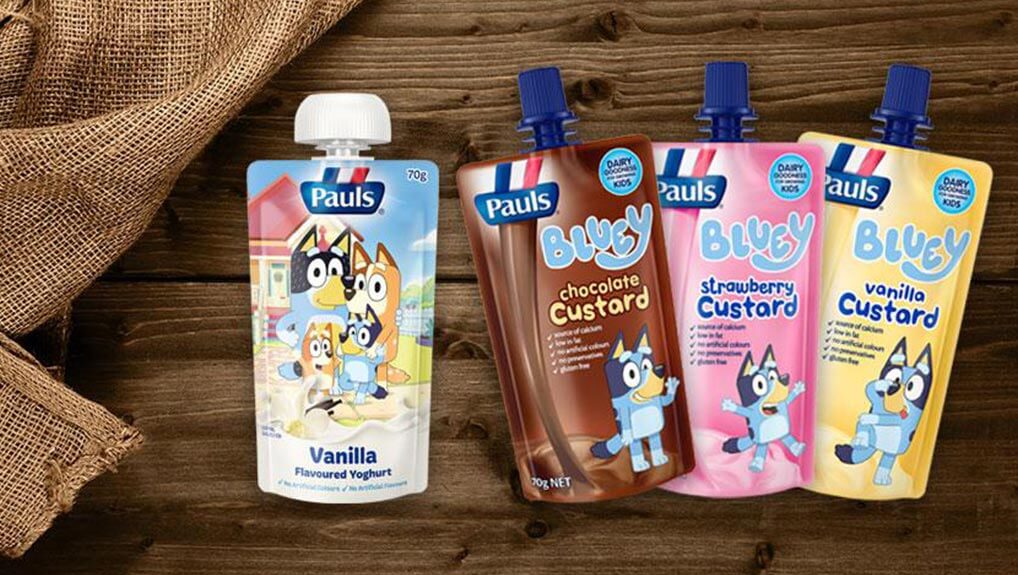 Pauls is upping the fun on a range of their popular custards and yoghurts with the launch of its new look children’s products featuring Australia’s favourite Blue Heeler, Bluey, launching from late April 2020. Following a partnership with BBC Studios, Pauls is proud to bring two Queensland icons together with the release of the first range of food products for the exciting Australian children’s brand.

Bluey and family will feature on Pauls Kids 70g Vanilla Yoghurt and across the range of Chocolate, Vanilla and Strawberry 70g custard pouches.

Packed with the goodness of dairy, Pauls Kids Yoghurts and Custards are a tasty way to give kids calcium, making them a great snack for at home, on-the-go or the school lunch box. Pauls Kids Yoghurts also contain the vitamins and minerals that a growing body requires..

A favourite among families, Bluey follows the adventures of a Blue Heeler puppy, who lives with her mum, dad, and little sister. Her energy and lovable spirit gets her into all kinds of funny and unpredictable situations, bringing adventure to everyday family life while developing her mental, physical and emotional resilience. Bluey is the most-watched series ever on ABC iview with series one surpassing 241 million program plays* and is the number one children’s series on metro broadcast television in Australia**. The series won a Logie Award for ‘Most Outstanding Children's Program’ in 2019, in addition to an AACTA Awardfor ‘Best Children's Program’ and an International Emmy Kids Award.

Pauls Kids 70g Vanilla Yoghurt with Bluey will be available in Woolworths and independent retailers nationwide.

Pauls Kids 70g Vanilla & Chocolate Custard Pouches with Bluey will be available in Woolworths, Coles and independent retailers nationwide, from late May 2020.

Pauls offer kids fun dairy snacks with their favourite characters, packed with dairy goodness and no artificial flavours or colours, making them the perfect snack for on-the-go or the lunch box! Pauls has been making delicious dairy products for over 80 years. We’ve supported hundreds of Australian farming families throughout this time, and are proud to make our products with the goodness of wholesome Australian milk. Pauls has a range of milks for the whole family, from Full Cream and Smarter White Milk, to PhysiCAL, Zymil, Skinny Milk and more. We also have plenty of other dairy products packed with goodness, including a deliciously good range of custards, yoghurts, creams, desserts, sour creams and flavoured milks.

BBC Studios, a global content company with British creativity at its heart, is a commercial subsidiary of the BBC Group. Able to take an idea seamlessly from thought to screen, it spans content financing, development, production, sales, branded services, and ancillaries from both its own productions and programmes and formats made by high-quality UK independents. Award-winning British programmes made by the business are internationally recognised across a broad range of genres and specialisms, including factual, drama, entertainment and comedy. BBC Studios has offices in 22 markets globally, including six production bases in the UK and production bases and partnerships in a further nine countries around the world. The company, which makes around 2,500 hours of content a year, is a champion for British creativity around the world and a committed partner for the UK’s independent sector. Created in April 2018 by the merger of two existing commercial subsidiaries, BBC Worldwide and BBC Studios, the company has revenue of around £1.4bn. In the year to March 2019, it returned £243m to the BBC Group, complementing the BBC’s licence fee and enhancing programmes for UK audiences.

The BBC Studios business in Australia and New Zealand wholly owns seven channels: BBC First, BBC UKTV, BBC Earth and CBeebies on Foxtel and Fetch TV in Australia; BBC Living (shortly to be replaced by BBC Brit) on Fetch TV; and BBC UKTV and BBC Earth on Sky TV in New Zealand. It distributes great British content from the BBC and other British producers to free-to-air, subscription channels and SVOD platforms and works with partners to bring BBC Studios DVDs, consumer products and live events to the local market. The production arm in Sydney produces BBC formats for the local market and creates new IP.

Ludo is a multi-Emmy ® and Logie award winning Australian studio that creates and produces Original scripted drama, animation and digital stories that are authored by incredible local talent, distributed globally and loved by audiences everywhere.
www.ludostudio.com.au